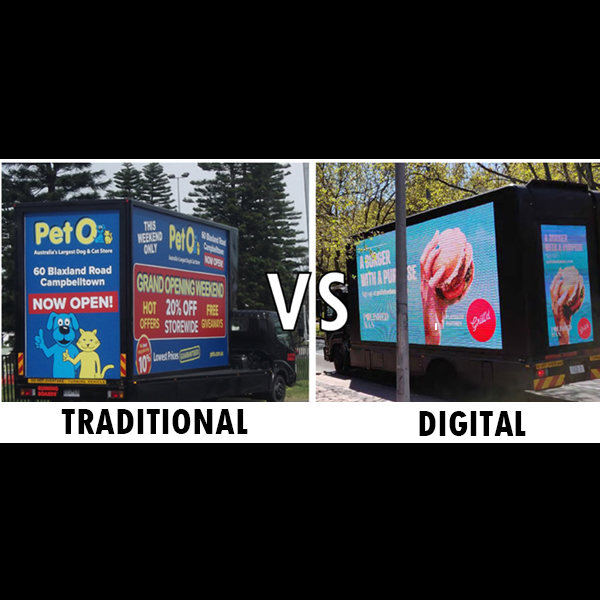 Either way, we’re going to help you answer the question ‘Should I use a traditional billboard, or a digital billboard for my next outdoor advertising campaign?’

Firstly, we will point out that there is no right or wrong answer – both formats are effective – but like anything, you always need to look at the message you are trying to convey before choosing which format is best for you. It all comes down to what the main goal of your campaign is.

Digital billboards grab attention, thanks to their bright screens and vibrant colours, along with the fact that they can have multiple moving images. Unlike a lot of outdoor digital screens, you will also have 100% share of voice on a Digital Mobile Billboard.

If the purpose of your campaign is to get multiple messages across to consumers, then digital is the way to go. We often use the example of a fast food chain that has different menu’s depending on the time of day – let’s say the restaurant wants to advertise their breakfast menu from 7am – 11am, then have their lunchtime menu up from 11am – 4pm, with a digital board you can do both, with just the simple flick of a button.

Or, what if you have a last-minute creative change? By last-minute we mean, the billboard is already out on a campaign and you need to change the message urgently – not to worry, just send us the new creative and we can have it up on the digital board in minutes.

They also offer plenty of flexibility.

Although they can only display static images when driving around, once they are away from the roadside, they can do anything your TV at home can, including live streams and playing movies. For this reason, we have had clients in the past who have not only used digital mobile billboards to advertise, but also screen movie events, all in the same day!

Did we mention the quick turnaround time? We have had clients come to us at 9am in the morning with an urgent brief, (for that same day), and the digital billboard has been out one hour later at 10am.

Traditional Mobile Billboards are great if you are looking for a more cost-effective option with one direct message that you want to get across to the public.  For example, you simply want to let locals know that your new store has opened – a static image will do the trick.

What if you have one direct message you want to use over a long period of time? Again, a static sign would be the most cost-effective option.

It might be an obvious point to make, but like digital, with traditional mobile billboards you also have 100% share of voice. We can always hold onto your signs at the end of a campaign and then re-use them at a later date, saving you production costs.

Although the turnaround time is not quite as quick as digital, we can still have a traditional billboard campaign up and running in the space of a few days.

Whatever decision you make will be a good one. If you are looking for greater flexibility, digital can help. Or, if you have one direct medium to long term message, traditional might be best.

Feel free to get in touch if you would like some more information on the right choice for you.